Lucky the Owner Was Armed 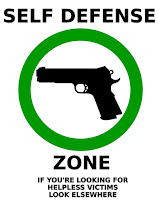 [Robert Keo, owner of Lucky Donuts,] told police the suspect's truck slammed into his back door and tore it off of its hinges. The man then entered through the opening created by the crash. In the police report, Keo said he feared for his life and warned the suspect to leave his shop.

The suspect did not listen and continued to move into the shop. Keo then fired one shot in self-defense which hit the suspect.

The truck was stolen, and it was later set on fire.

The suspect is still on the loose.

So I wonder if Lucky Donuts is a cop hangout. (Yeah, I went there.)