Another Failure of the Victim-selection Process 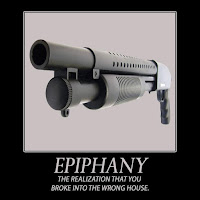 Self-defense does happen in the People's Republic of Chicago. Man fatally shot during attempted South Side home invasion | WGN-TV

Two guys decided it was a good idea to break into an occupied home on the South Side of Chicago.

The homeowner and two other people got into a physical confrontation with the home invaders. Chicago police said that’s when a gun went off and one of the invaders was killed. The other ran away and hasn’t been caught.

The investigation continues, but self-defense is a human-right, even in Chicago. It is still to be seen if the Criminal Justice System (sic) in that locale will recognize it as a legal right.