Keep Calm and Run for Your Life 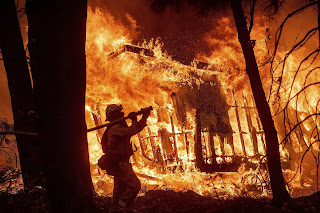 The Camp Fire that destroyed Paradise, California, Concow, California, and the surounding area remains fascinating. At least to me. Camp Fire Lessons – Keep Calm and Run for Your Life

The image at the right is of one of many that were taken the day the Camp Fire destroyed Paradise, Concow, and other places in California.

But this week they seem to have something good to say.

And while this is dealing with Wild Fires, there are many kinds of emergencies or disasters that require evacuations. I am most familiar with hurricanes, but even if your disaster doesn't give you any warning (like an earthquake or a tornado) having a plan for those contingencies will help.

The National Institute of Standards and Technology (NIST) released the 3rd report on the 2018 Camp Fire. A Case Study of the Camp Fire – Fire Progression Timeline. That is a 421 page PDF, so you may not want to download it on your phone. And while I have started to go through it, that is a lot of government-speak. So let's concentrate on the HST summary from the link at the top.

Even if your escape is slow, even if the streets are clogged and danger seems to be mounting, as it was in the Camp Fire, keeping your cool may prevent you from making a rash mistake that stops you altogether.

Lesson 2: If You’re Asking, “Should We Evacuate?” LEAVE NOW

A retired firefighter who has watched wildfires get bigger, faster and deadlier since the 1970s said this best: “If it occurs to you that you need to evacuate, you already should have evacuated.”

LESSON 3: Implement YOUR Emergency Plan A. And B. And C…

You do have a plan, don't you?

The nice thing about a plan is it gives you a head start when time is of the essence. While it’s true that the best laid plans of mice and men often go awry, that does not mean the planning is wasted.

As the emergency sirens (or your own good sense) reveal to you that a disaster has arrived, follow your plan. Trust that in more tranquil moments, you’ve thought about priorities and needs. Begin checking things off that list.

Our first impulse in an emergency is often to call 911 and wait for someone else to either deal with the issue or at least advise us.

In a normal emergency situation – a co-worker’s heart attack, a shooting, a building fire – those first responders “outnumber” the forces causing the danger. They can arrive and deal with it. But in making your plan to deal with disaster, this ‘call someone’ impulse works against you.

In a disaster you are your own first responder. Firefighters will be dealing with their own families.

And you should take a look at the other lessons as well.

The rest is good, and the small portion of that 421 page PDF I have gotten through isn't bad, but the 4th and 5th reports from NIST look to be a bit more interesting. Camp Fire Report #4: Notification, Evacuation, and Temporary Refuge Areas, and Burnovers, and Camp Fire Report #5: Emergency Response and Defensive Actions are still to be published. I haven't seen anything like a schedule of when they will be published.

And the House Rules are worth repeating here, because our whole modern world seems to be predicated on the idea that you are not responsible for your own safety. But in a disaster, you certainly will be.

3. You are your own best resource to SAVE WHO NEEDS TO BE SAVED.  Nobody wants to save your life more than you, so set yourself up for success by having the simple tools and knowledge to do so: do what you can with what you have.  Recognize that nobody is in a better position to start saving your life than you.

4. Sometimes saving lives means you have to KILL WHO NEEDS TO BE KILLED.  It has been almost 15 years since I first wrote “the more effective you are at taking a life, the more successful you’ll be at saving one” and nothing in the intervening time has changed my mind.  Be swift, be decisive, be final.

5. Mostly, ALWAYS BE WORKING.  There is always something you can be doing to improve your position.  Always.  Because nobody is coming to save you.