Not very many news organizations considered this worthy story. Horror moment woman is engulfed in flames after being doused in petrol and set on fire on Paris bus

A 54-year-old woman and her male companion were riding a bus in Noisy-le-Sec, which is an eastern suburb of Paris.

The bus was travelling through the suburban streets of the Seine-Saint-Denis department of Paris.

Several men then boarded the vehicle before one of them randomly sprayed the 54-year-old woman.

Her 50-year-old male companion was also soaked in the fluid.

Both passengers were then ignited.

Police are saying the attack was random - not related to gangs is what that means. Didn't seem too random.

The image below is of a tweet, and its translation, from the Préfecture de Police for the Paris region. (There are 2 such regions in all of France.) 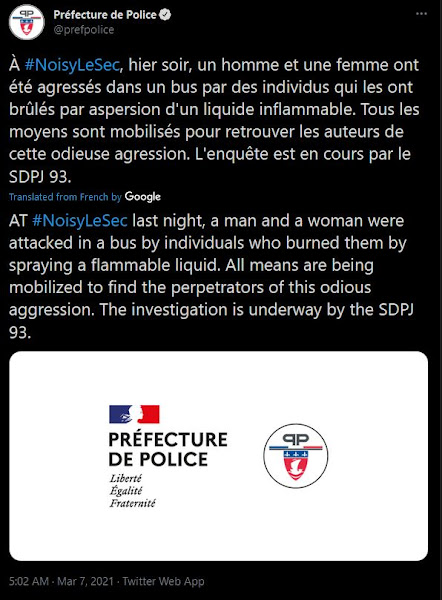 Brietbart lists the Paris suburb as a "no-go" place, which generally means that is an enclave of immigrants who object to women wearing Western fashion, but the news has been fairly scubbed on that score so I cannot tell if it is true or not. Man Sets Woman on Fire on Bus in Paris No-Go Suburbs. If anyone comes across more information on this incident, I would appreciate a link left in the comments.

Email ThisBlogThis!Share to TwitterShare to FacebookShare to Pinterest
Labels: Breakdown of Civilization, France