Don't Bring a Knife to a Gunfight 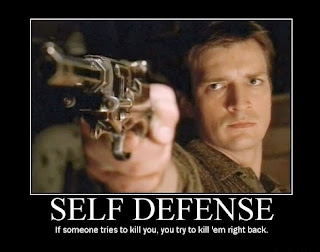 He suffered a failure of the victim-selection process. Intruder who entered home and grabbed kitchen knives shot by homeowner

The intruder broke into the home just after 11 p.m. on Wednesday evening. The suspect took two knives, and made his way to another room where he tried to stab a resident of the house who is confined to a wheelchair, police said.

The homeowner then opened fire on the suspect, shooting him in the stomach and arm.

He will live to face trial.