A ray of hope?

For a long time I have been trying to get people to stop using Google as a search engine, and start using anything else. I use DuckDuckGo because they do not track your every move on the internet. But there are other choices as well.

While glancing at the stats for the Blog earlier, I noticed that both DuckDuckGo and Bing were higher than Google on the referral list. Now that could just mean that Google has stopped referring people to this blog. I do say disparaging things about them from time to time, and I put forward views that do not line up with the tyrannical views of Big Tech.

Consider a Google search for "white american inventors" if you have doubts. A screen grab of the Images tab is below. The basic search returned "Steve Jobs" and "Temple Grandin" as the 2 people featured at the top of the page. Edison? William Shockley? (He and his team developed the transistor, which made computers and smartphones possible), Percy Spencer (generally credited with inventing the microwave oven) and more... But Google doesn't care about any of them. 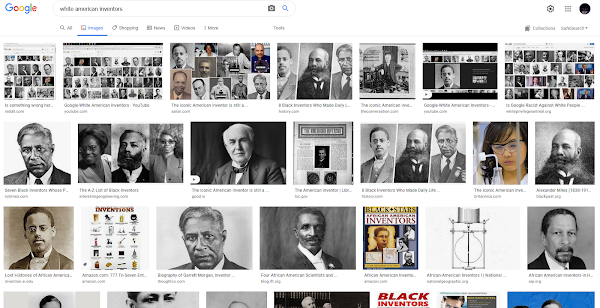 Email ThisBlogThis!Share to TwitterShare to FacebookShare to Pinterest
Labels: Technology Is Wonderful