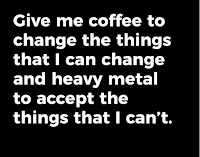 All hell has broken loose at Seton Hall University, where religious objections have been raised over a student-run radio station playing heavy metal.

Seton Hall is a Catholic institution.

In a move straight out of the 1984 “Footloose” movie playbook, The Lepanto Institute, an arch-conservative lay Catholic organization — which takes its name from a 16th-century naval battle between the Pope’s Holy League and the Ottoman Empire — has gathered hundreds of signatures on a petition demanding the station be silenced.

The lyrics are inciting Satanism, blasphemy and lead to violent behavior. Or something.

And of course you get a bunch of old folks praying about Heavy Metal music, you are going to get a reaction out of a group of university students, even at a Catholic university.

“We have stood praying the rosary outside the radio station to stop this diabolical evil, and literally have had students yell, ‘Hail Satan!’ at us,” said Maria Woltornist, of Glen Gardner, N.J., one of the organizers of the campaign to shut down the 73-year-old station.

They mention a band and song I haven't heard of. I may have to check out the music.

Email ThisBlogThis!Share to TwitterShare to FacebookShare to Pinterest
Labels: Metal for Mondays