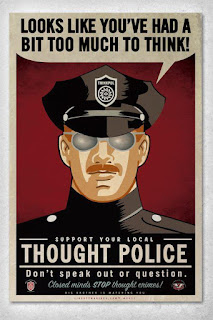 He was publicly shamed in the manor of the Chinese Communists. I Refuse to Stand By While My Students Are Indoctrinated - Common Sense with Bari Weiss

High school teacher Paul Rossi - he teaches math - got an education in the ways of the thought police.

First off? Racially segregated meetings? I thought we did away with racial segregation in education decades ago. My mistake.

Recently, I raised questions about this ideology at a mandatory, whites-only student and faculty Zoom meeting. (Such racially segregated sessions are now commonplace at my school.)

He found out what happens when you question the Party in communist dictatorship.

I was informed by the head of the high school that my philosophical challenges had caused “harm” to students, given that these topics were “life and death matters, about people’s flesh and blood and bone.” I was reprimanded for “acting like an independent agent of a set of principles or ideas or beliefs.” And I was told that by doing so, I failed to serve the “greater good and the higher truth.”

What higher truth is that?

The meetings were supposed to be "confidential." I think that means kids weren't supposed to discuss them with their parents.

A few days later, the head of school ordered all high school advisors to read a public reprimand of my conduct out loud to every student in the school. It was a surreal experience, walking the halls alone and hearing the words emitting from each classroom: “Events from last week compel us to underscore some aspects of our mission and share some thoughts about our community,” the statement began. “At independent schools, with their history of predominantly white populations, racism colludes with other forms of bias (sexism, classism, ableism and so much more) to undermine our stated ideals, and we must work hard to undo this history.”

Go read the entire, insane thing. If you think the way they treat a teacher is bad, look for the section on how a student was treated for daring to voice a "a conservative opinion in class." Welcome to the Soviet Union of America.