The Hard-hitting Journalism of 2020 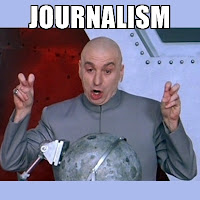 Or maybe not. How 2020 changed Justin Trudeau, and didn’t

Apparently the greatest thing that Justine Trudeau did in 2020 was grow a beard. (Who knows, maybe he's a Star Trek: The Next Generation fan.)

At the very beginning of this interminable year, Justin Trudeau grew a beard. The beard was Significant, a symbol of a once-youthful prime minister who was now older and wiser and battle-scarred.

I love the fact that "significant" is capitalized. It is REALLY significant in this journalist's mind.

This is what passes for journalism today. Journalists fawning over politicians they like, and issuing personal attacks on politicians they don't. Discuss policy? Discuss results? Why the journalists would need to know something about economics and the foreign policy of past administrations in the Middle East and elsewhere. They might need to know some of the history of the People's Republic of China, or The Soviet Union. They would need to know what Checkpoint Charlie was, or be familiar with The Great Leap Forward, The Cultural Revolution, and maybe even the Killing Fields of Cambodia. It is soooo much easier to just like the Socialists and hate Free Markets. Without ever having read Marx or Adam Smith o course.

And it is pretty clear that today, Journalists know nothing about anything.

Hat tip to King Angry Ostrich at Twitter who asks, "Bro, do you even journalism?" Which is a good question.