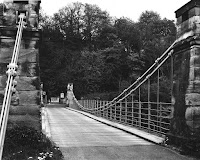 It hasn't been completely ignored, but it would seem to be overdue for repairs. The wonder of Whorlton suspension bridge – one of the great survivors

It was built in the earliest days of its era when other bridges all around it were collapsing. It is a testament to the brave faith of the villagers and investors and now, 189 years later, it is the UK's oldest road suspension bridge with its deck supported by its original iron chains, and it is the UK's earliest surviving iron chained suspension bridge with pylons at each end.

The image at the top is from the article. It is listed as being from the 1960s, but no attribution information is given.

The bridge has been closed to automobile and truck traffic since the middle of 2019, and it was just closed to pedestrians and cyclists in December.

Winston Churchill stood on the bridge to watch troops training in that area in December 1942.

Still, 189 years is a long time for iron chains.