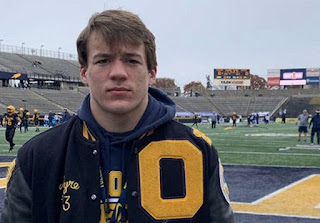 The Lamestream Media will will publish the name of the shooter, but Tate Myre is who we should remember. A High School Football Player Rushed A School Shooter And Sacrificed His Own Life To Save His Classmates

According to his fellow students, Myre, who played running back for the Oxford Wildcats football team, was shot while trying to disarm the shooter and later died from his injuries.

There is a movement to rename the school football arena in his honor.

“Greater love hath no man than this, that a man lay down his life for his friends.” John 15:13

Email ThisBlogThis!Share to TwitterShare to FacebookShare to Pinterest
Labels: Heroism