The Passing of a Hero: JStark

JStark was the subject of the documentary Plastic Defence, by Popular Front, which is about 3D-printed guns. OK, not all of the parts are 3D printed. There is some metal in most of them, like the barrel, the bolt, etc.

JStark died shortly after being arrested for violating gun control laws in Europe. Authorities are saying he had a heart attack, and the police in "Western Europe" would never lie about something like that.

The video embedded below is about 2 or 3 minutes with a few words about JStark, and a few clips from Plastic Defence. There is a link to the complete documentary, which is less than 30 minutes, below the video, and a second link to Popular Front.

This is the video from Popular Front on the passing of JStark.

You can find the full documentary Plastic Defence at this link.

You can find Popular Front at this link.

Hat tip to Impro Guns for the news, and to the Tactical Hermit for the short video.

He was ratted out to authorities by the banks. Think about that, and think about why the Biden Regime wants to have access to all of your spending habits. Some have said that he made some OpSec errors, but it is harder to hide anything from the surveillance state every day. 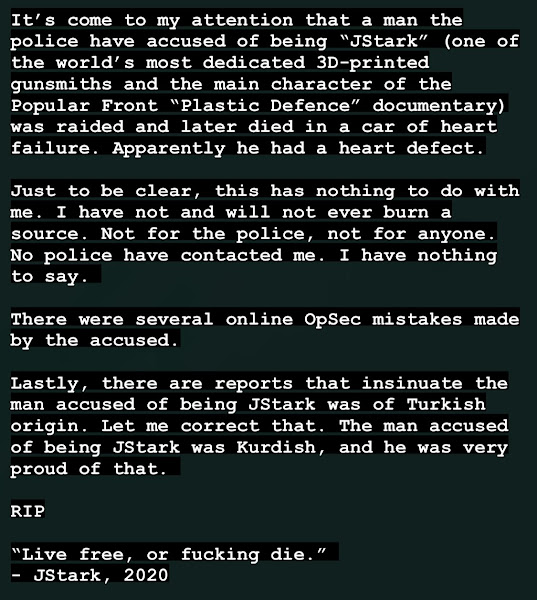