Scientists Can Be Boneheaded Fools 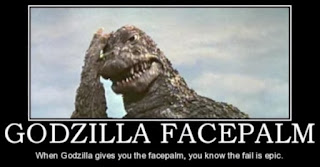 Virtual Mirage brings us the story of Louis Slotin, a scientist at Los Alamos National Laboratory. Fiddling with Rufus

Gentleman, what we have here is the most powerful force ever created by mankind. Lets poke at it with a screwdriver.
— Louis Slotin, Los Alamos Laboratory

Godzilla is providing a nuclear-level facepalm for this one.

Rufus was a sphere of plutonium. It was originally supposed to be used in a nucler weapons test, but it ended up being used for criticallity experiments.

On August 21st, 1945 physicist Harry K. Daghlian Jr., was conducting a criticality experiment with Rufus when he accidentally dropped a tungsten carbide brick on the core. The core went supercritical, releasing a burst of neutron and gamma radiation while bathing the room in a bright blue light.

Daghlian died 25 days later. That was when Rufus was renamed as The Demon Core. You would think that would mean "Be Careful!" Not so much, as it turns out.

The new procedure involved the core sitting between two beryllium half spheres. A screwdriver was jammed in between the two half spheres, creating a gap through which neutrons could escape.

On May 26th, 1946 Slotin was conducting a criticality experiment with the demon core when he lost control of his screwdriver, causing the beryllium sphere to close. The incident is almost perfectly re-enacted in the 1989 film “Fat Man and Little Boy.”

Slotin was dead nine days later. Two other people in the room would die from cancer years later.

At least it caused the Powers That Be to institute new safety rules, build remote-controlled machines, and melt Rufus down for reuse.

If you haven't studied radiation, you are probably underestimating exactly how awful a death from acute radiation poisoning is. I would not stick around for that end.

There is this myth propagating in the 21st Century that Scientists are dispassionate geniuses that can tell you everything about everything, including how to run your life. And while some of them are geniuses in their field of study, others should not be let out of the house without a keeper. Slotin knew Daghlian, and was at his side when he died, and still, less than one year later, this happened.

So the next time someone quotes that myth at you, tell them the story of Rufus.