A Take on Die Hard I Hadn't Seen 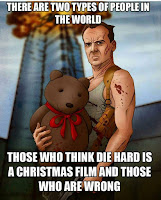 And could have done without. ‘Happy Trails, Hans’: What Is Everybody’s Favorite Christmas Movie Really About?

It seems that not only is Die Hard a Christmas movie, true, it is also an anti-capitalist-rant. Not so true, or if it is, it fails miserably.

So the fact that John McClane had never ridden in a limo was supposed to be some huge statement.

By 1988, it was entirely commonplace for groups of middle-class teenagers to rent limousines for their prom dates. Making a limo ride a symbol of evil capitalism — a point of honor for the “working class hero” that he had never ridden in a limousine — is a childish gesture.

But most anti-capitalist gestures in the middle of multi-million-dollar action movies would be childish. Who do you think paid for the movie to be made? Did the actors work for free?

Click thru. It isn't long, and there is so much more. The current "cargo cult" around wealth, and the insanity of action movies in general, together with a bit of the history of Leftist violence in the 20th Century.

Younger audiences know nothing of Baader-Meinhof and the larger context of violent left-wing radicalism during the Cold War (e.g., the Weather Underground, the Symbionese Liberation Army, the Black Liberation Army).

Email ThisBlogThis!Share to TwitterShare to FacebookShare to Pinterest
Labels: History Lesson, Insanity of the Left, Movies and TV